Loving the Least of These

Loving ‘the Least of These’ 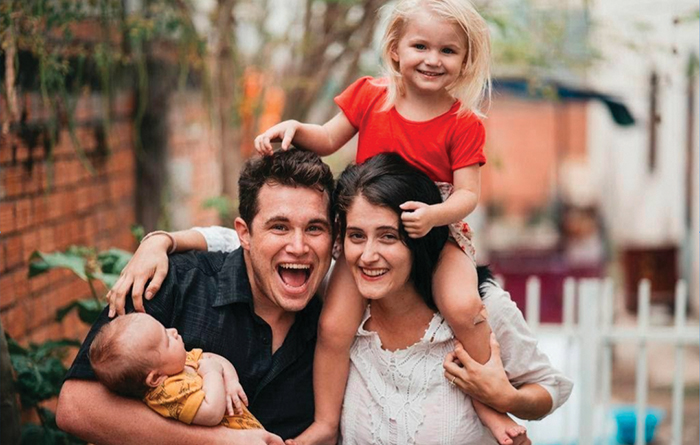 Josh and Hillary Smith and their two children in Phnom Penh, Cambodia.

After editing the Alumni & Friends magazine story about the missionary work of Josh Smith ’17 and his wife, Hillary (May ’16–’17) in Cambodia, one of the world’s most impoverished countries, I consider these Moody graduates two of my biggest heroes of the faith.

No, the reason the Smiths won me over isn’t because of our shared last name. It can be summed up in this quote from Josh: “Our main heart is caring for the poor in the slum communities.”

Like Josh and Hillary, my life has never been the same since meeting the poorest of the poor. In 2003 I traveled to Sao Paulo, Brazil, as part of a communications team for Awana, a nonprofit children’s ministry. One day we went door to door in a shanty town near a church that ran Awana clubs for underprivileged kids.

I can still picture the squalor.

The typical shanty was built from whatever scrap material people could find: sheet metal, wood, mismatched bricks, and mud. Most shanties lacked electricity, running water, street drainage, or sanitation. The average shanty was roughly the size of a bedroom in a middle-class American home. Some families positioned old bathtubs or barrels from junk yards next to their roof to collect run-off rainwater for drinking, cooking, and bathing.

One shanty we entered was home to a single mother’s family. Their dwelling was no bigger than my undistinguished office at Moody. Her seven children crammed into two bunk beds. Her older kids were busy scouring the city gathering glass and aluminum to yield a meager return from the recycling center. The children were undersized from malnourishment.

Walking out of the last shanty that day, we struggled to fight back tears. Everyone felt disheartened for the people we met. Our graphic designer was so moved by everything we witnessed that she returned to the shanty to donate her clothes for the trip to one family.

After Sao Paulo, my family started sponsoring a child through a humanitarian aid ministry. But Josh and Hillary Smith are doing exponentially more.

They’re giving their entire lives to the poor.

Josh arrived at Moody in 2013 dreaming of pastoring a church in America, even earning his bachelor's degree in Pastoral Studies from Moody. But by the time he and Hillary graduated—particularly after serving low-income Chicagoans in Practical Christian Ministries like Free Prayer—God had redirected their vision.

“I began to feel this conviction,” Josh said, “to each the unreached who hadn’t heard before. I really felt the call of being a missionary.”

Josh and Hillary were so convinced of God’s plans that Josh declined two job offers to pastor churches after graduation. Instead, the Smiths packed their bags for a missions opportunity in Phnom Penh, Cambodia. They even strategically purchased a small house a half-mile from the most poverty-stricken section of the city so they can build relationships, meet physical needs, and share Christ with the poor.

The Smiths live off their income from a school that employs them and spend all their donor support on food for destitute families and Bible resources. Hillary takes low-income mothers shopping for essentials while ministering to them, and Josh visits villages to distribute meals and Bible materials and introduce residents to Jesus.

“While everyone’s eating and they’re all sitting down, we’ll just start sharing,” Josh says. “We’ll ask questions like, ‘Where do you think you go when you die? We want to share this with you—the one true God who made you, He loves you.’”