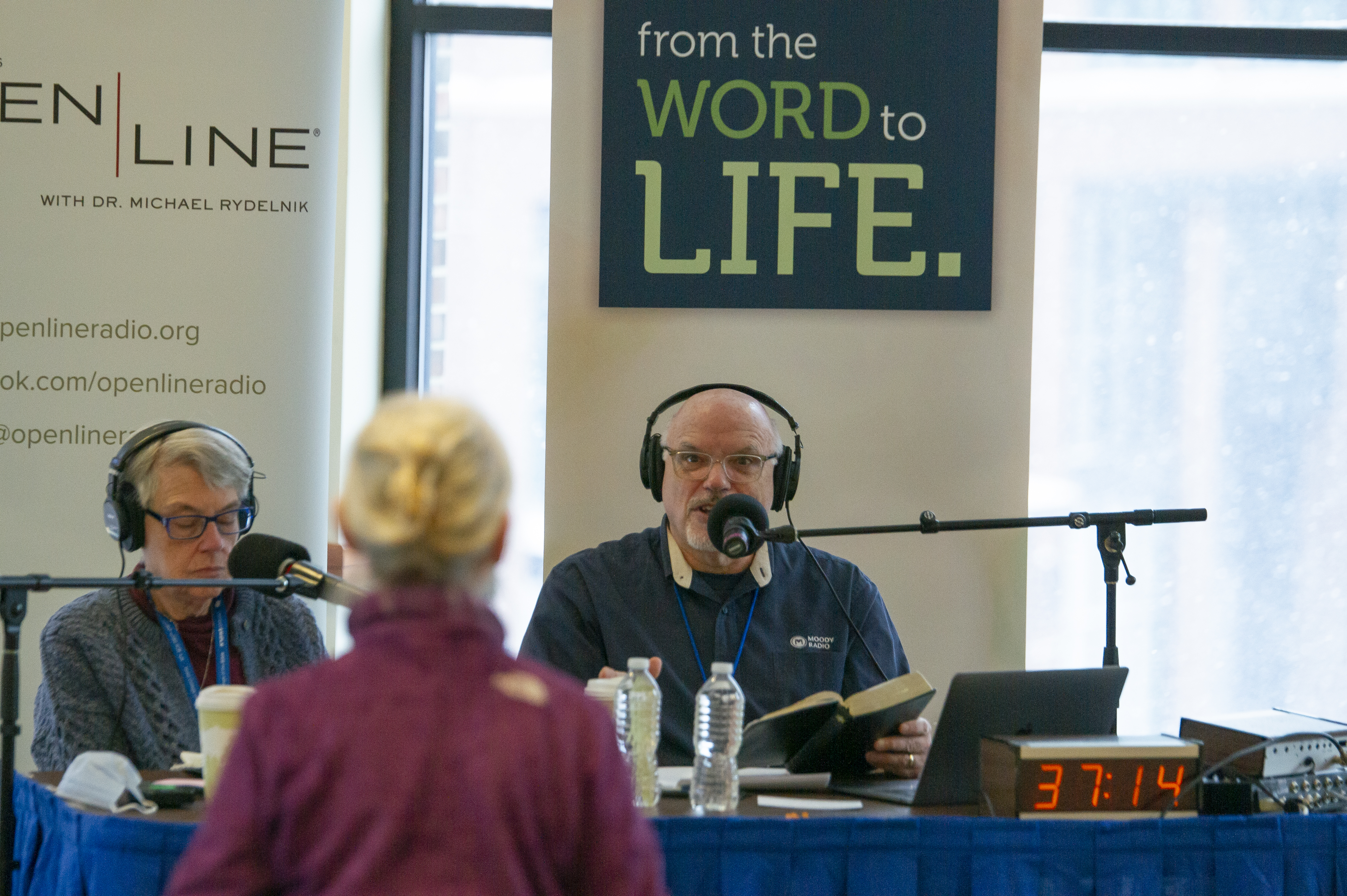 Composed of current Moody students and visiting alumni, the live audience stirs in their seats as McMillan steps up to explain recording etiquette. Then she leads them in a round of applause as the Open Line theme soars.

“Thank you for coming,” says Dr. Rydelnik to the audience. “When I looked at the snow today, I thought no one would show. You are the faithful few!”

Dr. Rydelnik seems right at home as he nods to the first person in the lineup. Hannah introduces herself and asks her question: How do the Rydelniks suggest that Moody students prepare for traveling to the Holy Land?

Professor Rydelnik leans forward. “One of the great things about our faith is that it’s not just a fairy tale,” she says. “Our faith in the Messiah is based on history and geography.”

Dr. Rydelnik agrees, suggesting that students read the book of Matthew and pay attention to geographical references. “Israel is not only the Bible land. It’s a modern land,” he says.

Dr. Rydelnik, the son of Holocaust survivors, enjoys leading study groups to Israel, often with Professor Rydelnik, a 1976 alum and adjunct professor at Moody. Dr. Rydelnik, a 1983 alum who has taught Jewish Studies for more than 25 years, will be leading a Moody tour of Israel from May 21–June 1 with Dr. Mark Jobe and Dr. Crawford Loritts.

Later, a student named Victoria asks, “How are the roles of angels defined in the present?”

“Well, my guardian angel is named Clarence,” Dr. Rydelnik quips, alluding to the bumbling angel portrayed in the Christmas movie It's a Wonderful Life.

Dr. Rydelnik goes on to explain that the Bible often depicts angels ministering to believers and that believers have often been consumed by curiosity about these heavenly beings. Ultimately, says Dr. Rydelnik, “We ought to be faithful to God and not consumed by angelology.”

Brennan grew up listening to Open Line with his family. He says the show deeply shaped his family’s theology and inspired him to come to Moody as a student, where he now gets to be a part of the influential program. Brennan asks the Rydelniks to explain the distinction between unbelieving Jewish people and the church.

Dr. Rydelnik notes that although the majority of Jewish people today do not believe in Jesus, one day the nation of Israel will turn to their Messiah.

“Even though God’s people have rejected Him, He loves them,” Dr. Rydelnik says. “If you’re wondering about the state of unsaved Jewish people, they are still chosen, and they are still loved.”

Professor Rydelnik adds, “Once a Jewish person comes to faith, they are still Jewish. It doesn’t change your ethnicity to believe in Jesus.”

The rest of the afternoon unfolds with more deep questions, thoughtful answers, and much laughter. At the end of the show, McMillan invites everyone to line up so Dr. Rydlenik can sign their free copy of 50 Most Important Bible Questions (2021).

Dr. Rydelnik, an author who co-edited The Moody Handbook on Messianic Prophecy (2019) and The Moody Bible Commentary (2014), cheerfully takes pictures with audience members and signs his name. “I love Founder’s Week,” he says.

Professor Rydelnik, also a contributor to The Moody Bible Commentary, smiles and jokes, “You have to really love the Word of God to come to Chicago in February for a Bible conference.”