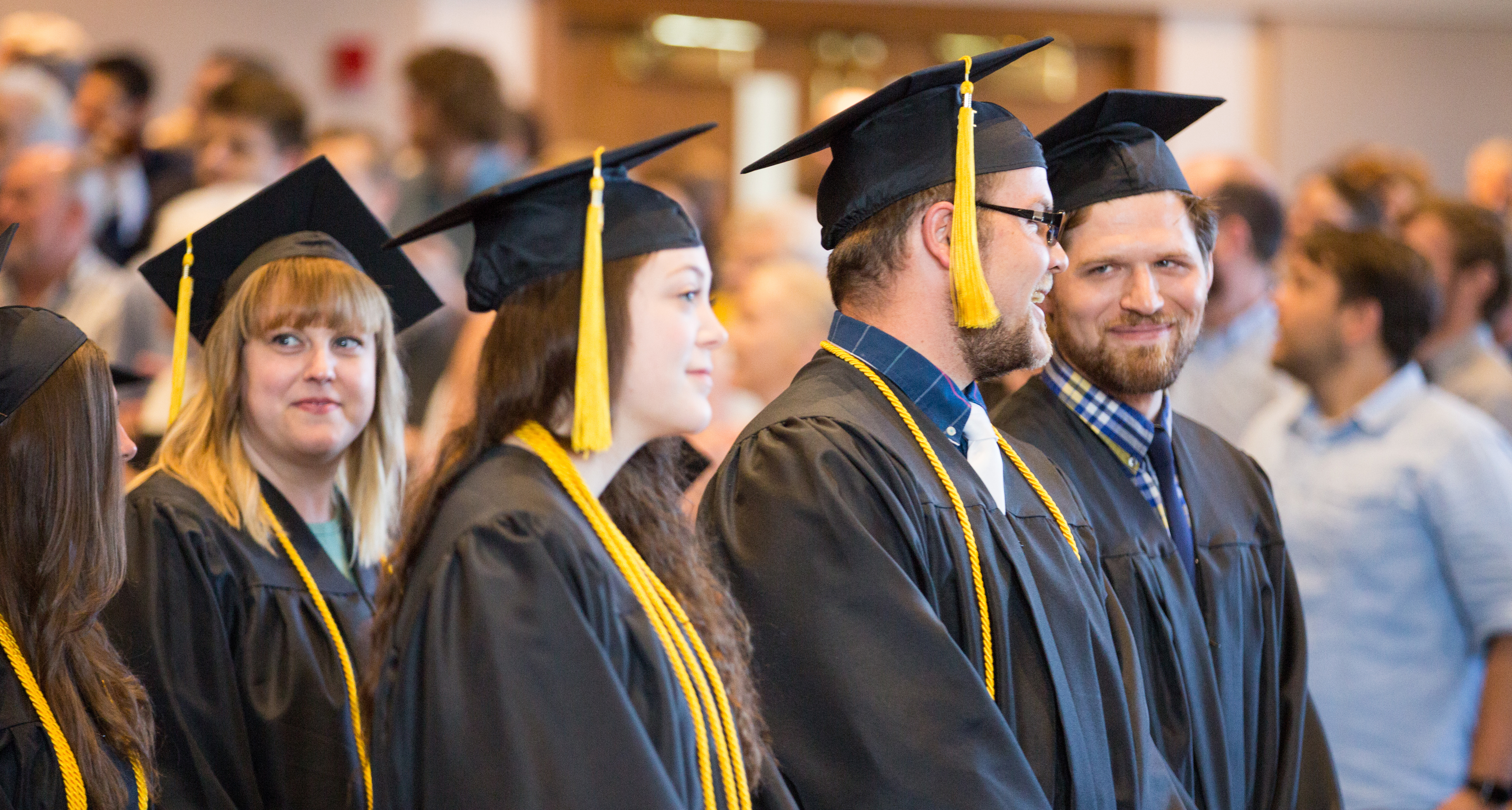 In May Moody Bible Institute in Spokane held the final graduation ceremony for its biblical studies campus, as Moody repositions various aspects of its ministries. The school has produced many graduates—from Fulbright scholars to digital marketing associates—who have been enormously valued by local churches. The biblical studies campus in Spokane offered degrees in Bible, Pastoral Studies, Intercultural Studies, and Youth Ministry.

Meanwhile, Moody Aviation will remain open in Spokane, with a robust program that continues to equip students and supply graduates to mission agencies around the world.

All of Spokane’s biblical studies students were offered transfers to the Chicago campus or into Moody Bible Institute Distance Learning. More than 100 students have transitioned, along with two professors who now work at the Chicago campus, including Chris Rappazini ’07 in Applied Theology and Jonathan Armstrong in Biblical Exposition.

Moody Bible Institute’s first undergraduate branch campus opened in Spokane in 2006. Dr. Tom Cornman was dean of the undergraduate school and instrumental in getting approval from Washington State’s higher education board. But the school goes back even further to 1993, when it was Moody Northwest under the direction of Moody’s External Studies (distance learning) division.

Dr. Jack Lewis, campus dean of Moody Bible Institute Spokane, was at the school from the beginning—even before 1993. He attended Inland Empire School of the Bible—the precursor to Moody in Spokane—the first semester it opened as a day school in fall 1973. Ten years later, with further training from Dallas Theological Seminary, Lewis returned to serve on the board and teach as an adjunct professor while pastoring a Spokane church. In 1989, the school reorganized and changed its name to Spokane Bible College.

In 1993, Lewis and the board invited Moody Bible Institute in Chicago to take over the school. For one thing, Spokane Bible College wanted academic accreditation. “Students had started to vote with their tuition dollars to go only to schools that had full regional or ABHE accreditation,” Lewis says.

Additionally, “The stability of Moody doctrinally attracted us, because it’s where we were as a school,” he says. “So we kept thinking, Wouldn’t it be nice to be part of Moody?”

By then Moody had established extension sites in Florida, Ohio, as well as evening school in Chicago, so, from Moody’s perspective, Spokane would become another Moody extension site with one difference: students could enroll in residential day classes. Moody liked the idea and agreed to continue the conversation.

In 1993, the IRS informed Spokane Bible College that the school owed $20,000. Moody was reluctant to take on a school carrying substantial debt and the conversations stalled. Then, in an unexpected reversal, the IRS agreed to forgive the $10,000 penalty. A few weeks later, Spokane Bible College found out they were named in the will of a local Catholic priest who said, “One of your students led me into a relationship with Christ that I’d never known.” He had left half of his estate, worth approximately $10,000, to the school.

Moody had a long-term lease with Fourth Memorial Church, which has a 1000-seat auditorium, faculty and administrative offices, classrooms, and student space. But by 2003 the school was struggling to maintain enrollment. “We had dwindled down to 15 to 20 students,” says Lewis. While the future looked uncertain, they would soon experience unexpected growth due to transitions within Moody’s aviation program.

After much research, deliberation, and prayer, the decision was made to relocate Moody Aviation to Felts Field, an airport located about 15 minutes from the Spokane campus. The decision to relocate would not only save the aviation program but ultimately revitalize the Spokane school.

“It was a symbiotic relationship,” McMath says. “The move to Spokane made it possible for Moody Aviation to continue with less expense. The move also provided an infusion of about 40 additional freshman students every year, which made at the time a big difference in Moody Northwest.”

After the move, Moody Northwest was brought under the undergraduate division in 2006 and became Moody Bible Institute in Spokane. That change not only provided a surge in students but the need for more faculty and staff.

Moody eventually offered eight full-time undergraduate degree programs. Every faculty member on Spokane’s biblical studies campus had an earned doctorate or was a PhD candidate. “That’s 100 percent of the faculty with terminal degrees, which is unusual at any school,” says Lewis. The school had about 650 students at its peak.

“Those were the years, about seven years’ worth of time when we had more students than we knew what to do with,” McMath says. “But demographics changed, and as the student supply began drying up, we stopped getting the overflow from Chicago.”

Then late last year the difficult decision was made to close the Spokane campus. “We have a 45-year history of Bible education in Spokane. That’s hard to give up for the community,” says Lewis.

McMath, who will continue teaching Biblical Studies at Moody Aviation, says the same about the faculty and staff. “We’ve got some remarkable talent here, so I’m looking forward to seeing what God is going to do with everybody.”

“God is at work in things and He’s doing all things well. He doesn’t make mistakes. So we’re good. We’re good,” McMath adds. “It’s going to be difficult but it’s going to be good.”

Gabe Bewley is one of many students who transitioned from Spokane to the Chicago campus. In fact, he arrived for classes in January 2018. “Literally a day or two before they announced the closing, I had prayed about coming to Chicago. So right away I applied,” he says.

Bewley admits it’s hard to compare the two campuses. “Here there’s dorms, a student dining room, public safety. I’m urban now. But I love it because it’s Chicago, and I just love the opportunity to experience a lot of what the city has to offer. And the diversity of not just the student body but the faculty here has been amazing.”

His Practical Christian Ministry assignment with Inner City Impact has been an eye-opener. “Just being able to work with kids who don’t necessarily come from a church background—we get a lot of questions, like ‘How do we know the Bible is true?’” he says. “Thankfully I’m taking Life in Bible Times, and we know that there are actual accounts of Jesus being alive, archaeological evidence of Old Testament places, and people like Josephus actually writing about it. It’s cool to actually use what I’m learning.”

Bewley, who has a job on campus in Marketing Communications, is grateful to gain experience interacting with other departments like Moody Radio and Moody Publishers. “I’m really happy I decided to come here,” he says. “I think a lot of my classmates who come out here are going to love it too. At the very least it’s a learning experience.”

Moody Aviation just completed its 71st year, with 27 instructors and 115 aviation students, 12 of whom graduated in May as pilot mechanics and one as a maintenance specialist.

Moody Aviation will continue to supply two years of Bible education in the context of the BS in Missionary Aviation Technology degree. All coursework will be held on campus at Felts Field, where Moody Aviation has three hangars and two classrooms for Bible, General Education, and technical courses. Thanks to generous donors, they will have three advanced flight simulators by February 2019.

Moody Aviation students start with a year of biblical studies and general education courses. They add maintenance training and become air frame and power plant mechanics over years two and three. In years four and five, they decide whether they want to become a maintenance specialist or a pilot mechanic. They also become a private pilot, then an instrument and commercial pilot.

The aviation major is the most expensive major Moody offers: about $120,000 for the five-year program. But with scholarships, FLAPS (Forgivable Loan Assistance Program for Students), and unique partnership programs that coach students on fundraising tools, the average debt of a Moody Aviation student ends up being between $20,000 and $30,000. “That’s significantly less than other schools that offer less flight time,” Conrad points out.

Still a Need for Mission Aviators

Mission aviators are needed as much as ever before. Remote places and small bases are still scattered around the world, but with more technology, many countries have different regulations for flying in their air space. The need continues to provide for the safety of missionary families who would encounter far more danger traveling by road. And because missions agencies with Moody-trained mission aviators have earned the respect of the countries they serve in, many countries now ask the missions agencies to help equip their national pilots and mechanics with technical skills in aviation.

“Mission aviation organizations could place 30 to 40 Moody graduates per year,” Conrad says. “Please pray for the Lord to send us students to be equipped as workers for the King’s harvest.”