“My office was meant to be a brothel,” Melissa (Harned ’97) Stock says. “Almost every single building our organization owns or rents is a former brothel. The enemy intended it for evil, but look what they are now!”

“Girls work at establishments where it’s their job to seduce the men.” Melissa refers to human trafficking in Cambodia, where she and her husband, Matthew, serve with Agape International Missions. “They’re tipped based on what happens after they leave the club and go to the man’s hotel with him. There is a lot of gang rape happening because of this.”

“These young women have few to no other options for work, and are trapped in this lifestyle to support their families,” Melissa says, then concludes after a moment of silence. “They pray to God, saying, I want out of this.”

Eight years ago Melissa was teaching music at Northwest Christian University in Oregon and running a small cupcake business on the side. “Matthew and I didn’t even like Asian food. I hadn’t made rice in our first ten years of marriage,” Melissa says wryly. “Now I can taste the difference between types of rice.”

Rice isn’t the only thing radically different about their life in Cambodia. Melissa’s prayer emails now often include comments like, AIM rescued seven underage girls that evening, and it was as horrible as you can imagine to see where these girls lived and worked.

How did a Moody music major and her husband end up on the other side of the globe fighting human trafficking?

At Moody, Melissa practiced piano early in the morning, went to classes, worked as a nanny, and went inline vert ramp skating most nights. Even though she never anticipated ministering to victims of sexual exploitation (now a highly-regarded major at Moody), Melissa’s music classes prepared her. “My professors taught me much more than music,” Melissa says. “I look back on my time at Moody and say, Thank you, Lord, for my professors and how they trained me in music, but also as a leader and a professional.”

After graduation, she took a job in California as a music director at the Crystal Cathedral. There, a singing group of three brothers from Oregon caught her attention. “I called them my singing lumberjacks,” Melissa remembers fondly. Two years later she married one of those singing lumberjacks, Matthew Stock, a co-owner of Wipf and Stock Publishers. Matthew earned a BA in Psychology that would prepare him for the intensity of fighting human-trafficking.

Melissa moved to Oregon and became a music professor at NCU. While there, she started an annual Candlelight Carols similar to the yearly Christmas performance at Moody. She also ran a cupcake business “for extra purse and shoe money.”

When the college asked Melissa and Matthew to chaperone a short-term mission trip to Cambodia, “we went home and looked to find Cambodia on a map!” Melissa admits. “Then I found a cupcake place called Bloom Café. I test cupcakes everywhere I go for tasty market research.” Eager to visit Cambodia (and the cupcake shop), Matthew and Melissa agreed to go.

While in Phnom Penh, they met with the directors of Bloom Café. They learned about the ministry of Bloom Asia, a nongovernmental organization that provides jobs in various fields to help restore the lives of women with difficult backgrounds. “Now realizing what their busy schedules are like, I’m so honored that they took the time,” Melissa says.

“We fell in love with it all,” she recalls. “With the dust and dirt and heat and humidity and people.”

“If something devastating was happening to our nieces or nephews, I would do anything—anything,” Melissa remembers saying. “These girls in Siem Reap don’t have that aunt or uncle to fight for them.” 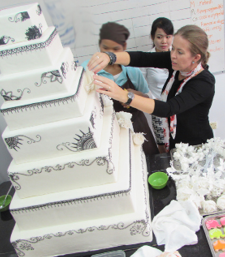 Melissa and Matthew moved to Cambodia and celebrated their tenth wedding anniversary on their first day there. “I always told my husband, ‘Let’s go somewhere exotic for our tenth anniversary,’” Melissa jokes. “So we moved to Cambodia!” Before long, it became home.

Melissa and Matthew made a five-year commitment to Bloom Café in Siem Reap. “It was our goal to work ourselves out of a job,” Melissa says. “We’d establish the place and teach and train the women so it would run without us.” The women running the café gained culinary and hospitality skills, but in late 2018 the Bloom Café in Siem Reap closed. The cupcake and cake industry in Siem Reap was tourist driven and not sustainable long-term.

In late 2017 after the five-year commitment ended, AIM invited Matthew to be the country director for Cambodia, and Melissa to be the director of international development.

After agreeing, Matthew and Melissa moved to Phnom Penh in January 2018. Now they’re overseeing AIM’s 12 ministry programs and 30 expats and 450 Cambodian employees doing hands-on work to rescue young women who have been forced into trafficking and sexual abuse.

Matthew sometimes joins the government-sanctioned SWAT team on raids to bars, restaurants, massage parlors, and even brothels. “If someone is offering a massage for three dollars, it’s most likely not legitimate,” Melissa comments. “It’s devastating to see.” These raids have become part of everyday life.

“We have been busy with the aftermath and responsibilities from a huge rescue, thirty-two pregnant girls,” Melissa writes in a prayer email. “All the babies were going to be trafficked.”

The girls are instead brought to a safe restoration home, a space where they can feel comfortable, loved, safe, and supported. The transformation is remarkable. “These women came in and couldn’t look you in the eye, wouldn’t speak a word,” Melissa says. “Two months later, they are laughing and smiling and singing and speaking in English or Khmer (the Cambodian language).”

Once rescued, the girls are trained for an occupation if they’re old enough, or they’re sent to school onsite at the restoration home. “Ninety percent of women who aren’t given jobs or new skills after being rescued from sex trafficking will end up back in that life,” Melissa says. “They don’t have any other skills to offer, so they go back to what they know.”

And if the rescue program doesn’t include Jesus, the girls often go back to their old life. “They don’t have the heart transformation to recognize that they’re God’s child,” Melissa says, sadly. The rescued women learn about Christ and His love. They are taught essential skills and receive vocational training that enables each girl to find her dignity, value, and a renewed hope for the future.

Melissa teaches a hospitality
class to women at risk in Cambodia.

The girls can learn a variety of skills, such as sewing, jewelry design, or baking. “We have so many programs in after-care and reintegration, including finding jobs for these girls,” Melissa says. “We would have to stop rescuing if we couldn’t provide jobs.”

She resources jobs from people in countries around the world who want a good or service ethically produced (e.g., above minimum wage). AIM also provides childcare, health benefits, and even subsidized lunches.

Melissa also works with groups who want to help but don’t know how. “We have people who say, ‘We realize there’s a need, what can we do?’” While Melissa has plenty of options for teams to serve short-term, a major need is for people to come to Cambodia and teach a trade.

Melissa is amazed at the intensity of the work. “We’re doing prevention, rescue, restoration, and reintegration. We need prayer for capacity to handle all that is thrown our way,” she says.

AIM’s 12 programs include stores, employment centers, a school, and even a kickboxing gym that’s a direct ministry to the pimps and traffickers and drug dealers. They come to work out, and while there they hear the message of salvation and meet godly men. AIM is also building a larger school to educate more children so they aren’t forced into trafficking by a lack of education.

“You can be devastated, seeing girls and kids on the street with only one set of clothes who don’t get showers,” Melissa admits. “But you have to see the progress being done, you have to see where this once was a row of brothels or massage parlors, and now ministry sites have replaced them.”