“Would all the graduates please rise!” When more than 600 undergraduate students in The Moody Church’s center aisle rose to their feet with diplomas in hand, deafening cheers and applause erupted from the packed assembly.

The graduates at Moody Aviation in Spokane, Washington, and Moody Theological Seminary in Chicago and in Plymouth, Michigan, also celebrated with joy. A total of 611 undergraduate and 180 seminary students, as well as 15 Moody Aviation students took part in four commencement ceremonies. Of the graduating students, 171 undergraduates and 23 graduate students completed one of Moody’s distance learning programs.

Dr. Mark Jobe ’84, MTS ’98 called it a “deeply moving experience” to take part in his first commencement season as president of Moody. “Your faces, your testimonies, your vision, your commitment to Jesus, the sense of calling that you have upon your life, they inspire me,” he told the graduates. “I’m honored, extremely honored to be standing before you and grateful to lead this 133-year-old powerhouse of gospel transformation that we call the Moody Bible Institute.”

“This is not a school that dispenses or confers diplomas for the sake of education. We exist for the sake of a mission,” Dr. Jobe explained. “Education is the means by which we help fulfill the mission, but we have a driving mission—the gospel of our Lord Jesus Christ, the discipleship of all nations, impacting this world for the sake of King Jesus.”

During Chicago’s undergraduate commencement, Greg Thornton ’81, senior vice president of Media for Moody Bible Institute and former interim president, received an honorary Doctor of Divinity degree. “Greg was the right choice,” said Dr. Jobe, who conferred the honorary degree. “His leadership has been characterized from day one with humility, prayer, sincerity, dependence on God.”

Thornton graduated in 1981, then began his career at Moody Publishers. He was eventually promoted to vice president, and last year to interim president. Under his leadership, Moody Publishers began digital publishing and acquired Wingspread Publishers (2013), which includes authors such as A.W. Tozer.

Dr. Jobe acknowledged retiring faculty, including Steven Clark, Dr. Michael McDuffee, Dr. John Koesler, and Dr. Terry Strandt. “They are not retiring from serving God. They are going on to use their skills in other places.” He also mentioned two transitioning faculty: Dr. Xiangtang Hong and Clive Craigen.

A week earlier, at Moody Theological Seminary’s commencement in Michigan, Dr. Jobe met Jessica Robins, who spent the past six years working toward her Master of Divinity degree. Her faith story, he said, was reflected by the message she wrote on the decorated mortarboard of her graduation cap: “Ex-Atheist.”

At the Moody Theological Seminary commencement in Chicago, the late Scott Anderson ’19, who passed away in 2018, was honored posthumously with his Master of Divinity degree. Interim provost Dr. John Jelinek, vice president and dean of the seminary, presented the degree to Scott’s dad and mom, and fiancé, Rachel Campbell, in his stead.

Dr. Jobe and his wife, Dee, visited Moody Aviation in Spokane for the first time, where they participated in a pastor’s lunch at the Moody Aviation hangar, shared with alumni at an alumni dinner, flew one of the new flight simulators, and took a flight in one of the Moody Aviation training aircraft, a Cessna 206. The pilot was instructor Jonathan Schmidt ’86, a Moody Aviation grad who’d served with SAMAIR Peru for more than 25 years and is on loan to Moody Aviation, training the next generation of Moody aviators.

Dr. Jobe gave the commencement address in the Felts Field hangar. “The highlight of my trip, by far, has been to meet the faculty and students of Moody Aviation,” he said. “What an incredible, incredible team is in this place and what a phenomenal job they’re doing.”

One of the aviation graduates, Stephen Sample, shared the class verse, Philippians 2:1–2, and said, “The Lord has really shifted my mindset from being about the glory I can achieve to the service that I can give to the Lord and the ways that I can sacrifice my life. And I know all the students agree with me on this, for they’re wanting to sacrifice their life for kingdom work. . . . Our challenge is not to become the best pilots or the coolest dudes or the best mechanics, but to humbly serve for the rest of our lives.”

Jim Conrad ’98, program manager and professor of Missionary Aviation Technology, said, “We’re excited about what the Lord is doing in and through Moody Aviation in staff and students and looking forward to many years in the future of continued ministry here in Spokane to our students.”

Dr. Bob MacRae ’75, professor of Youth Ministry and program head, captured the spirit of all four commencements in his benediction at the Chicago service: “As you get ready to leave this place, which now you do today, to remember the basics of the gospel, to love God with everything that you have, to love people, and to make disciples. May God bless you.” 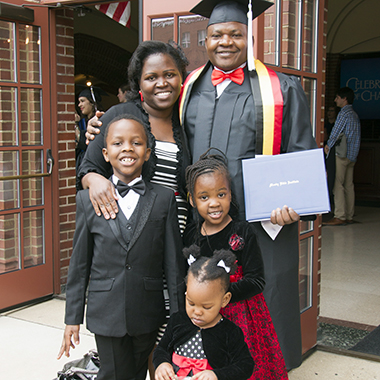 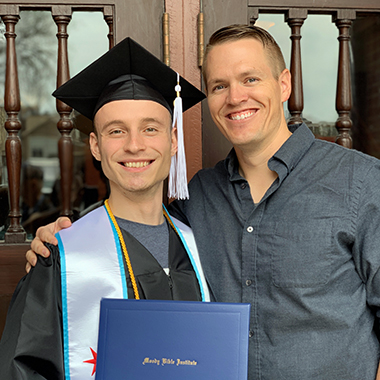 A Glimpse at the Graduates

Whether students attended Moody on campus or completed one of Moody’s online programs, all of the graduates have a story to tell. Here are a few examples:

“The only reason I went into the military was for here—for this day,” said Wade McKinley of Clarksville, Tennessee, who spent six years in the Army before using the GI Bill to complete Moody’s online BS in Biblical Studies degree. McKinley, who was a missionary in Asia with Operation Mobilization before joining the Army, now plans to be a chaplain for retired military veterans, many of whom suffer from post-traumatic stress disorder and other problems.

Yudah Tadeo Okumu came to Moody from Kampala Baptist Church in Kampala, Uganda, with his wife and four children under age 7. He received his BA in Pastoral Studies and is now enrolled in Moody Theological Seminary. “Moody is a great school, and I came specifically to get this training in this environment so I can be a good pastor back home who rightly divides the Word of truth, and to be able to train other men and women in ministry in order to strengthen the church,” he said.

Tirzah Walker, who lost her family home in last year’s California fires, received her Bachelor of Arts degree with a Jewish Studies interdisciplinary. Her parents and two of her siblings were in attendance at commencement. “The Lord’s blessed us so much since [the fire], and this is part of that blessing,” said her dad, who leads a Messianic Jewish congregation in Paradise, California. “We are so proud of her and excited, and she’s worked hard.” This fall Tirzah will pursue a master’s degree from Moody Theological Seminary, while her sister, Zemeira, will be a freshman at Moody.

Ryan Hubner, who was in high school when he sensed the call to become a pastor, received his Bachelor of Science in Biblical Studies through Moody’s distance learning. “I loved it,” he said. “I actually got to have the experience of working at church while I was in school, so it was a fun experience.” Hubner serves at Scottsdale Bible Church in Arizona and is now in seminary.

Pastor Blake Williams traveled from Arizona to see the graduation of Joshua Grunden, a young man he’d mentored at Shiloh Community Church in Phoenix for seven years. Williams says Grunden, who wants to be a pastor and received a BA in Biblical Exposition, chose Moody Bible Institute for its doctrine and “really good track record for preparing undergrads for ministry.” Grunden married his college sweetheart, Alyssa Coy ’18. “It was really neat to watch Joshua take all the steps and do all the things he’s done,” Williams said.