“When the translation is finished, we fly in boxes and boxes of Bibles,” David says. “Hundreds and hundreds of kilos of them.”

This is just part of what David Petersen ’12 does as a pilot with Mission Aviation Fellowship in Nyankunde, Democratic Republic of the Congo. “We regularly fly for twelve Bible translations. Recently, four translations were completed at the same time,” David says. After every translation is complete, MAF often flies in the Bibles and attendees for a dedication ceremony and celebration. David and his wife, Ashley (Anderson ’06–’07), attended a ceremony held last year.

“At the dedication we heard the impact that MAF had over those long years as the translation occurred. The lives that were saved, the lives that were lost in the translation process during the wars, the struggle that the missionaries faced,” says David, who has lived in Africa with his wife since 2014. “It’s really encouraging for us to be part of the dedication, because it’s a quick glimpse into a twenty-five-year partnership that worked well.”

MAF often flies missionaries and translators in and out of villages to do consultations and courses, like workshops on translating the Bible or how to use the translation computer software. In addition to flying people, when a village or translation location needs a great quantity of material, MAF flies the freight. “Once we took all the solar panels and batteries and inverters to a village where they were translating the Bible,” David says. “This equipment gives them all the logistical power needed to run laptops to translate in a way that’s not as time-consuming.”

David’s flights vary everyday by need—whether it’s flying a missionary to another village to help with translation work, delivering vaccinations and supplies to a town or region requesting medical assistance, or transporting a patient to a larger hospital for advanced medical attention.

Sitting in the plane with people gives David an opportunity to talk to them about faith. Although the people of the Democratic Republic of the Congo are frequently evangelized, they’ve been exposed to a lot of false teaching and synchretism. Many of them, lacking discipleship, practice a wild breed of Christianity. “People say Congo is majority Christian, but the faith is disturbingly shallow,” David remarks. “If you ask, ‘Hey, do you know who God and Jesus are?’ the vast majority of people know and believe they’re saved, but their theology is way off. It’s completely works-based faith, and there’s no freedom in the gospel.” 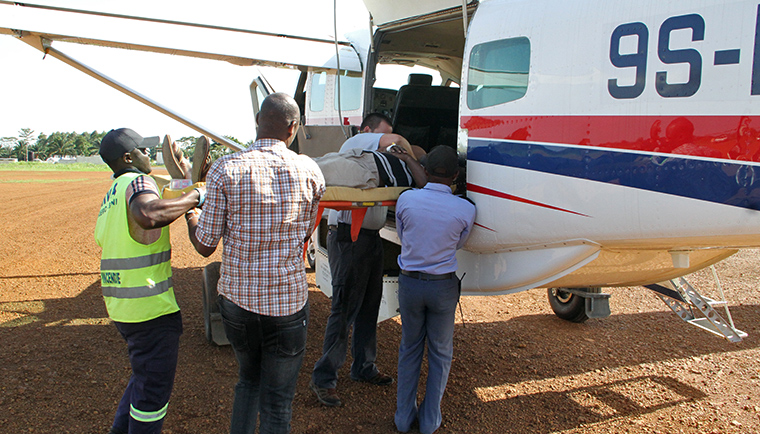 David Petersen tends to a patient in a medevac from Beni, DRC.

Using what he learned at Moody, David is able to talk about the gift and freedom of salvation. “Witnessing to people looks more like trying to help them correct their theology and thoughts about God,” he says. In addition to the opportunities the crew gets while flying, MAF holds a daily chapel in the hangar for their staff and the local people they’ve hired. Through prayer and devotion, they teach and model what it means to be a Christian.

Farming for Body and Soul

While David serves as a pilot, Ashley is hard at work raising their son, Daniel, and beginning a community development project. Nyankunde, a small village on the east side of the country, is as rural as it gets. “There’s no pavement, no anything,” David says. “Most people are still in mud huts with grass roofs.” Several factors, including the tropical climate, theft, wild animals, and lack of information on good agricultural practices, hinder many of the people from successfully sustaining plants and animals. 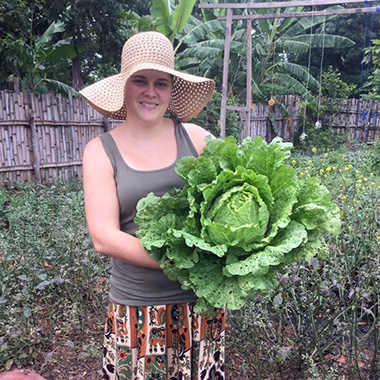 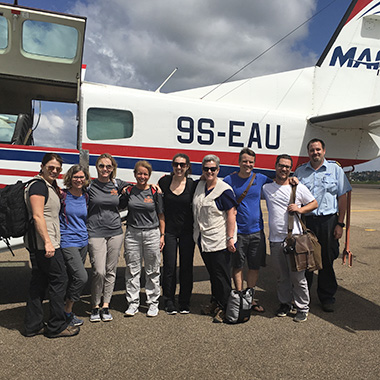 Ashley (right photo) with a new variety of cabbage that does well in DRC. David Petersen (far right of left photo) flew this Samaritan’s Purse Ebola response team from Uganda to DRC, where they set up a treatment center.

Ashley, already raising chickens and various vegetables, is working hard to cultivate species of plants and animals that thrive there. When she discovers something that does well, she’ll distribute free seeds and young animals to the local people and teach them how to farm and raise animals for themselves. Ashley wants to teach them a new way of life so families won’t be malnourished, kids can receive an education, and medical necessities are affordable.

The community development project also invests in people’s physical wellness to open doors to their spiritual health. As she works with local people, some of whom she’s hired to help with gardening, clearing land, and raising animals, Ashley talks to them about life, faith, theology, and God’s free gift of salvation. In Nyankunde a kid can go to school for $14 a month, and a whole chicken sells for $15, so even giving a family a chicken is modeling how God gives gifts for our own benefit.

Trial and Error in Tropical Agriculture

Learning tropical agriculture hasn’t been easy. Plants react differently to the weather, and animals have a host of obstacles to overcome.

Yet in the midst of disappointment and waiting, God is faithful. After four years of trying to buy the empty lot behind their house to expand the project, in early 2018 the owner abruptly decided to sell it.

“We bought the land right away,” says David. “When we signed the contract for the property, we were given huge financial breaks by the local authorities. They could have charged us upwards of eight hundred dollars for the signing and they only charged us fifty.”

Immediately after they purchased the land, David, Ashley, and their four-year-old son, Daniel, went on their scheduled furlough. They updated churches on David’s flying work and the community development project. God’s blessing continued as they raised $20,000 for the project. They keep friends and supporters informed through their blog: thisafricanhomestead.blog.

Returning from furlough, they began working on the land right away. They put up another fence to protect from wild animals, welded and installed a gate, put in a water line for irrigation as they began to plant, built a foundation for a water tank, exhumed the overgrown barn foundation, and built a foundation for a classroom. Ashley and some other local aid workers will soon teach classes for the community about agriculture and nutrition.

“The local chief is very excited about the project, and very on board,” says David. “He’s super encouraged that MAF is involved in the community, and that we, as individuals, are going to be involved.”

Ashley and David are learning by trial and error what works and what doesn’t, but they celebrate every success. “We’ve brought in hundreds of breeds of plants from around the world and tried them and found quite a few that are good,” David says. “American sweet potatoes and purple sweet potatoes do well, and we also found the first breed of carrot that will give seed in this climate.”

As they trust God through the losses and the wins, David and Ashley seek to model His gift of salvation to local people through providing valuable transportation and agricultural instruction. “If you have nothing, you can’t get started,” David says. “We’ll be getting people started.”