Troy Fichter ’02 MA ’04 recently led the women’s cross country team to win its sixth straight NCCAA Division II national championship. Troy was also awarded Coach of the Year for the sixth year in a row. All of this becomes more remarkable considering that the NCCAA has only held the event for six years.

“It’s fantastic,” says Dan Dunn, professor and chair of the Athletic Department. “They’re the only team that has ever won the Division II championship. For that you have to have talent, but I think Troy takes them over the top with his coaching.”

Troy is grateful for the 14 women on his team. “God blessed us with some good runners—some fast runners—and we always give God the glory as a team. We always say running is a gift from God.” But while adding another cross country trophy to the Solheim Center display case is thrilling, Troy says he’d trade every championship for a team of servant-hearted runners who encourage each other.

Happily, he has evidence of both.

After an earlier cross country meet in Wisconsin last fall, a secular school coach sent Troy an email saying how much it meant to the women on his team that members from Moody’s team talked and prayed with them. Troy beams. “As a coach, that brings tears to my eyes.”

Then there was the 5K championship race in November, where the top seven national runners from a dozen Division II colleges competed on a challenging, hilly course at College of the Ozarks in Point Lookout, Missouri. With four Archers out front and the finish line in sight, junior Toria Allem (ranked number five) suddenly collapsed in exhaustion. Coming from behind, her teammate Megan Bernard, a junior, lifted her to her feet. “Come on, we’re going to make it!” she urged. Then junior Mystique Kalat caught up and joined them, helping Toria cross the finish line.

Troy framed a large photograph of that moment in the race to show his team and reinforce the team theme of being united. “The thing that touches my heart, and this is what we’re about, is helping your sister—the encouragement of them walking through the finish together,” he says.

In a closer race, the slow-down could have affected the score, but the Archers still had the best score. They totaled 33 points, finishing with four runners in the top 10 and winning the championship. 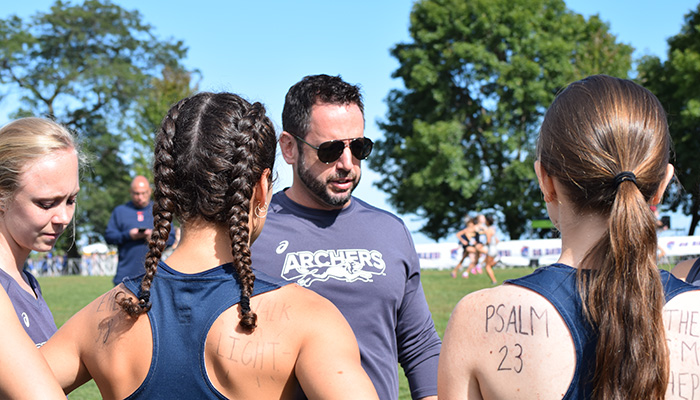 Coach Troy Fichter prays with the team before a race.

A distance runner himself, Troy has coached the women’s cross country team since it was formed in 2012 to comply with Title IX federal funding rules. Troy doesn’t cut women from the cross country team, but each runner must meet the minimum requirements of running five miles a day, six days a week, at a 9 1/2-minute mile, or a 26-minute 5K, before the season starts. He starts every practice with prayer and has devotions with the team once a week.

Besides coaching, Troy is athletic operations manager for the Solheim Center, a position he’s held since 2008. He runs the varsity sports and oversees and trains the student workers. He also teaches a full load of classes for hundreds of students and has a running club three times a week for any students, faculty, or staff who are interested. “We explore the city,” says Troy, who points out cool architecture as they jog to the Lincoln Park Zoo or special exhibits like Christkindlmarket.

“I’m doing a lot but I love it,” he says. “I love pouring into the students.”

At the Archer women’s awards banquet, Troy hands out plaques with individual awards. The Flash Award went to Maddy Boyle and Emi Minnich, both all-Americans, who were second and third in the nation this year. He gave the Servant’s Heart Award to Molly Hansen, who, despite injuries that prevented her from running this season, served as team videographer and maintained a great attitude. Toria Allem got the Dig Deep Award for consistently giving her best.

Toria says Coach Fichter has taught her to relate running to her walk with Christ. “Races are difficult, but we continue to give our best and to push hard because it’s ultimately not for ourselves; it’s for God’s glory.”

Abigail Ellis, a junior in Intercultural Ministries, says, “He’s the best coach I’ve ever had. He always makes sure Christ is the center of our team and always encourages us in a lot of different ways. And he’s good at helping us reach our goals too.”

Troy enjoys combining his passion for mentoring young people with his love for physical fitness. Every year Troy has to rebuild at least half of the team because students often have other priorities, such as ministry jobs or marriage. “It’s hard to keep them for three to four years. But I always say, ‘Go where God has you.’”

Getting Equipped to Lead

Raised with a twin sister and Christian parents in Ohio, Troy committed his life to Christ as a young adult and soon became a youth leader in his church. But he felt unequipped to lead a youth group, so he started taking classes locally through Moody Evening School. When he found out Moody had a main campus in Chicago, he transferred in January of 2000, graduating a few years later. Since then he’s earned a master’s in Spiritual Formation and Discipleship from Moody’s graduate school (2004) and an MA in Sports Fitness and Health from the United States Sports Academy.

Troy is a self-described sports fanatic, but he sees his ministry as preparing the team members for a life of service for the Lord. “Sports done the right way can really represent the Christian life,” he says. “There are times we want to quit because it’s hard, but if we persevere, it can teach us to get ready for the next trial in life.”

Ironically, for the past six winning seasons, Troy has faced his own trials. An allergic reaction to an antibiotic six years ago caused chronic fatigue, and exposure to black mold exacerbated his health problems. “It’s been humbling,” says Troy, whose health is slowly improving. “I used to be a pull-up-your-bootstraps type of guy, but I feel God has let this happen to prevent pride. I work with 320 students, and some of them are going through things. I’m more empathetic now.”

So while it’s great to win at nationals, Troy wants the women on Moody’s cross country team to be, first and foremost, united in Christ for His glory. “When I see them hugging and encouraging the other young women, and if we can plant a seed in someone who doesn’t know Jesus—if we can shine the light of Christ—that’s more important than any race.”