When Ronald Clay robbed an armored Brink’s truck, he tried using a gun to solve his financial problems. Instead he got charged with a felony and 10 years in federal prison.

Locked up in a Kentucky prison, Ronald’s life went from bad to worse. “I stole, gambled, got in fights, and a number of times went to the hole,” he says of his time in the isolation unit. “I felt disrespected, angry, upset, emotional, just really fighting. And the fight was real.”

The spiritual battle was also real. Raised in Chicago’s south suburbs, Ronald wasn’t like a lot of the guys in prison who grew up without a father. He had a mom and a dad and even a college degree. But as the son of a Bible-believing pastor, Ronald says he was rebelling against his strict Christian upbringing and against God. “That’s what my whole thing was,” he says.

Yet God, in His mercy, had a plan to break through Ronald’s stony heart and set him free from the bondage of sin. And God would use not only Moody Radio but also Moody Bible Institute’s seminary in Chicago to transform Ronald’s life.

“Look, I was the dude who would get things done. I was grimy,” he says. “I did things I knew I shouldn’t do in prison. I wasn’t a righteous guy.”

Then in October 2012, news came that his dad had died from a brain aneurysm. Worse, his dad had tried unsuccessfully to get in touch with Ronald to say goodbye. “I was irate, emotional, angry at the prison and the chaplain who didn’t tell me,” he says. “I was really, really upset.”

Two days later, Ronald didn’t want to live anymore. He was walking the track and fell to his knees. “I said, ‘God, I surrender. I submit. I’m done. Lord, save me!”

After giving his life to Christ, Ronald started reading the Bible and told God he wanted to work for the kingdom. “I was trusting God to put me in a position after I got out, but God spoke in my heart: ‘What are you doing for Me now? You have kingdom work to do for Me in prison.’”

About the same time, Ronald came across Moody Radio and listened to back-to-back preaching programs every day for three hours. He’d wear headphones while working out, listening to pastors like Erwin Lutzer and J. Vernon McGee. “Being fed every day was encouraging me to get out and start prayer groups and start a Bible study.”

So he did. Every night after all the inmates were counted, he would meet with a group of them to pray. “The most we had was 19 in the prayer circle,” he says, “and we had four or five guys for the Bible studies I was leading.”

Despite being in prison, Ronald now felt free mentally and spiritually. “I walked, talked, and did things differently.” Besides reading almost 1,000 books, he started taking business planning classes they offered, and got certified as a welder.

Ronald felt an urgency to develop good habits and a daily routine that would continue after prison. “I started waking up at five a.m., did five-hundred pushups, read my Bible, and went to work to do welding.” 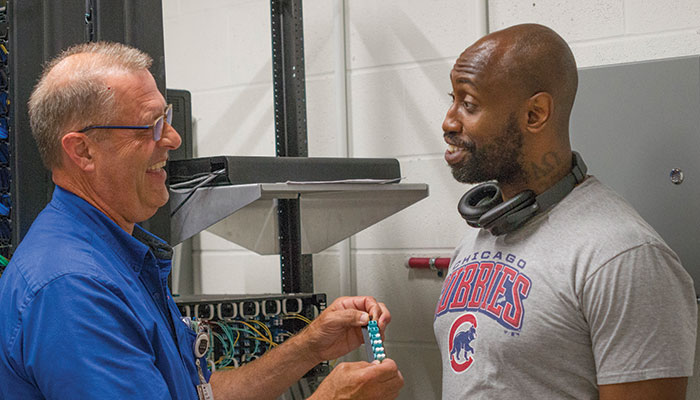 God gave Ronald favor with the warden and some of the correction officers, so he was able to organize events, such as a mock election, a fundraiser to collect school items for kids, and a panel discussion about the transition from prison to the community.

“A lot of people wake up and just check off the day on the calendar as another day closer to getting out,” he says. “But your release starts before you’re released.”

As Ronald grew in his faith, he desired to go to seminary to learn God’s Word. “I wanted to learn Hebrew and Greek and just be more involved with the Word,” he says. So he contacted the president of a nearby seminary but didn’t hear back. Finally a correctional officer who was a pastor said, “Why don’t you go to Moody?”

After more than eight years in prison, Ronald was released in January 2017 and moved to a Salvation Army halfway house in Chicago. He was so busy searching for a welding job that he almost forgot about his plans for seminary. “But here’s the funny thing,” he says. “I still picked up Moody Radio and listened to it because it was encouraging.” And as he took the bus on his job search, he would pass by Moody Bible Institute every day.

One day he got off the bus and went inside to talk to an Admissions counselor. He was invited to return and sit in on a graduate class: Church History with Dr. Sajan Mathews. Ronald was impressed. “I’m listening, I’m learning, and wow—this is something I would like to do. This is speaking to my heart.

“Then I sat in chapel, and the president preached about a guy who served 20 years in prison. I remember that sermon, and I see all these young people praising God with praise and worship. And it was like, ‘wow, this is beautiful,’” he says.

Ronald applied and was admitted to Moody Theological Seminary for a Master of Divinity. “I just fell in love with the school here,” says Ronald, who is now in his third year of graduate school. 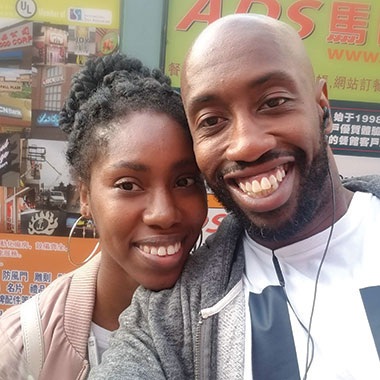 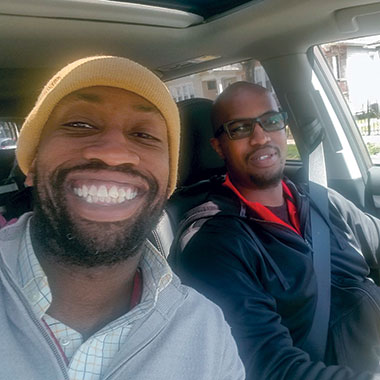 He also fell in love with an undergraduate student, Nathalie Edwards ’18. Well, not immediately. Their first meeting at a table in the Student Dining Room ended in a political argument. “I hope I never see him again,” she told a friend. And Ronald ended the conversation with “God bless the man who decides to marry you.”

You can guess how this part of the story ends. After Nathalie graduated in May 2018, they got married and moved into married student housing.

While completing his degree, Ronald works for the facilities department at Moody and is glad to begin welding again. He’s especially grateful for his boss, Scott Schaeffer, who is also a mentor to him. “He has been what my father would be if my father were here, spiritually encouraging me to pray every day,” Ronald says. “He speaks into my life and marriage and finances—and he’s a 65-year-old white guy.”

Ronald says the Christian discipleship he learns from his boss transcends culture and color. “I need a man to say, ‘This is how you treat your wife, this is how you come home. You need to leave work at work, spend time with her every day, and when you pray with her listen to her heart. Eat every day without the TV on.’ These things are not about black culture; they’re about Christian culture.”