Dwight Lyman Moody was born the sixth child of Edwin and Betsy Holton Moody in Northfield, Massachusetts on February 5, 1837. Dwight’s formal education ended after fifth grade, and he rapidly grew tired of life on the family farm. He left home at age 17 to seek employment in Boston.

After failing to secure a desirable position, he asked his uncle, Samuel Holton, for a job. Reluctantly, Uncle Samuel hired Dwight to work in his own retail shoe store. However, to keep young Moody out of mischief, employment was conditional upon his attendance at the Mt. Vernon Congregational Church. 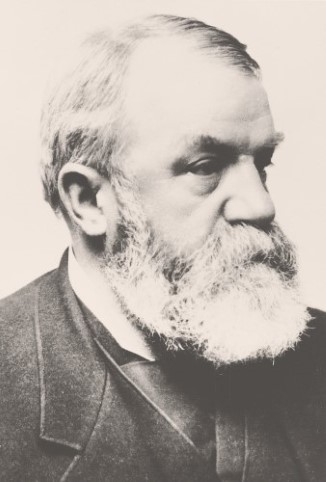 At Mt. Vernon Moody became part of the Sunday school class taught by Edward Kimball. On April 21, 1855, Kimball visited the Holton Shoe Store, found Moody in a stockroom, and there spoke to him of the love of Christ. Shortly thereafter, Moody accepted the love of God and devoted his life to serving Him. The following year brought Moody to Chicago with dreams of making his fortune in the shoe business. As he achieved success in selling shoes, Moody grew interested in providing a Sunday School class for Chicago's children and the local Young Men's Christian Association.

During the revival of 1857 and 1858, Moody became more involved at the YMCA, performing janitorial jobs for the organization and serving wherever they needed him. In 1860 when he left the business world, he continued to increase his time spent serving the organization. In the YMCA’s 1861–1862 annual report, Moody was praised for all his efforts. Although they could not pay him, the YMCA recommended he stay "employed" as city missionary. 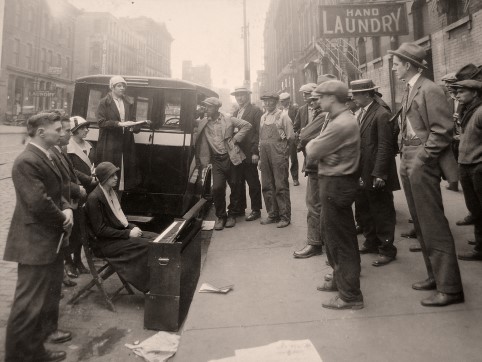 Meanwhile, Moody's Mission Sunday School flourished, and it was different. Moody's desire was to reach the lost youth of the city: the children with little to no education, less than ideal family situations, and poor economic circumstances. Soon the Sunday School outgrew the converted saloon used as a meeting hall. As the classes grew, associates encouraged Moody to begin his own church. Eventually, on February 28, 1864, the Illinois Street Church (now The Moody Church) opened in its own building with Moody as pastor. 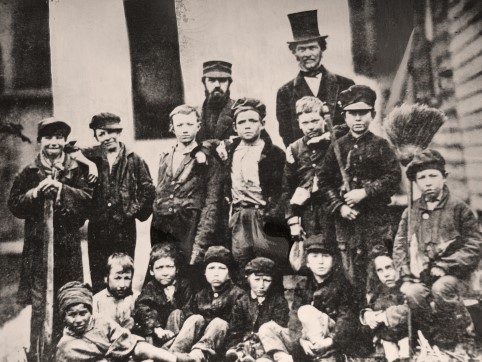 As the political landscape of the United States changed in the 1860s, Moody's connection with the YMCA proved a useful tool in his ministry. With the Civil War approaching, the Union Army mobilized volunteer soldiers across the north. Camp Douglas was established outside of Chicago, which Moody saw as a great evangelistic opportunity. Along with a few others, Moody created the Committee on Devotional Meetings to minister to the troops stationed at Camp Douglas, the 72nd Illinois Volunteer Regiment. This was just the beginning of Moody's Civil War outreach. From 1861 to 1865, he ministered on battlefields and throughout the city, state and country to thousands of soldiers, both Union and Confederate. All the while, he maintained the Mission Sunday School.

Emma Dryer and Her Training School for Women

While ministering in Chicago, Moody and his wife met a woman named Emma Dryer, a successful teacher and administrator. Moody was impressed with her zeal for ministry and her educational background. He knew that women had a unique ability to evangelize to mothers and children in a way that men never could, and saw Dryer as just the person to help him encourage this group.

Moody asked Dryer to oversee a ministry specifically to train women for evangelistic outreach and missionary work. Under Dryer's leadership, the training program grew rapidly, and so did her desire for this ministry to reach men as well as women. She continued to pray that the Lord would place the idea for such a school on Moody's heart. 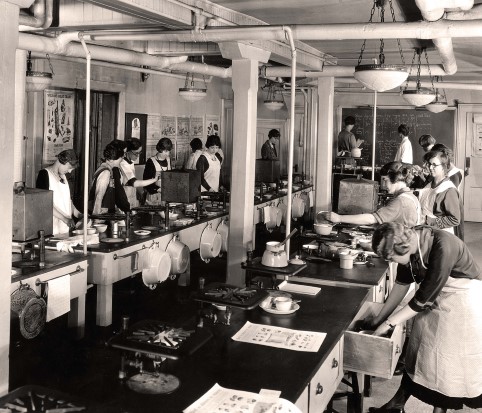 On Sunday, October 8, 1871, as Moody came to the end of his sermon for the evening, the city fire bell began to ring. At first, no one thought much about it, as these city bells often rung. However, this night was different—it was the beginning of the Great Chicago Fire. Moody's first concern was for his family, locating them and making sure they were somewhere safe. After securing his family's safety, Moody and his wife stayed on the north side of the city to help other residents. The fire finally burned out Tuesday afternoon, after consuming much of what Moody had built.

This was a poignant time in Moody's life and the fire forced him to reevaluate his ministry. It was during this time of evaluation he realized he needed to heed the Lord's call on his life. For years, he had been moving forward and then asking God to support his plans. He knew from this point on, his call was to preach the Word of God to the world. 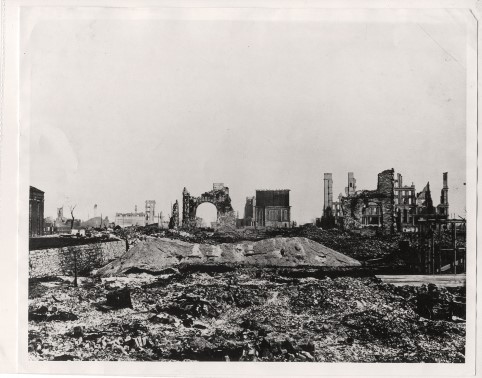 In June 1872 Moody made his first trip to the United Kingdom. While he was there a few close contacts urged him to come back in a year. In June 1873, Moody and his family, and his good friend and musician Ira Sankey with his wife all traveled from New York to Liverpool, England. Moody and Sankey traveled throughout the UK and Ireland holding meetings, helping fuel the revival that was slowly sweeping the region. Moody's visit made a lasting impression, and inspired lay people across the region to begin children's ministries and ministry training schools for women.

Moody was revolutionary in his evangelistic approach. Despite conflicting counsel from friends and trusted contacts, he and Sankey traveled to Ireland during a time when Catholics and Protestants were constantly at odds with each other. Moody was different: he did not care what denomination a person claimed, but just wanted the message of Christ to be heard. As a result, the revival swept into Ireland, and he won praises of both Catholics and Protestants. 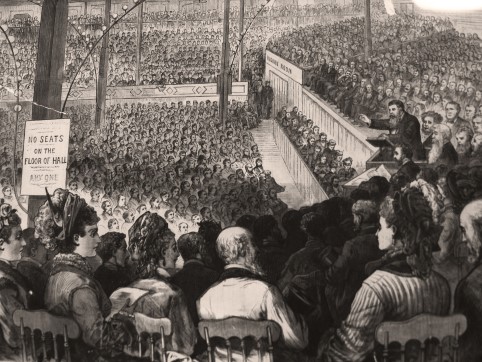 After two years overseas, the Moody family finally returned to the United States. They settled in Northfield, where Moody was born and raised, and he began to plan his next round of evangelistic city campaigns. From October 1875 to May 1876, Moody and three other evangelists toured through the major cities of the Midwest and Atlantic coast, preaching the message of salvation. Moody would embark on yet another city campaign before the desire to train young Christian workers would grip him again.

Moody was on the cutting edge of ministry, and in 1879, Moody opened the Northfield Seminary for Young Women to provide young women the opportunity to gain an education. Not long after, Moody created the Mount Hermon School for Boys with the same goal as the girls' school: to educate the poor and minorities. Moody had an amazing ability to bridge the gap between denominations, which was apparent in the diverse religious backgrounds of the school's students.

In 1886 Dryer's prayers were answered and the Chicago Evangelization Society (today, Moody Bible Institute) was founded. Moody had been focused on ministry near his home in Northfield but he came out to Chicago to help raise money for the Society, support Dryer, and see his dream become a reality. The Chicago Evangelization Society had been Moody's vision but really came to fruition because of Dryer's hard work. See History of Moody Bible Institute.

That same year, Moody assembled a large group of college students at Mount Hermon for the first "College Students' Summer School." This conference would birth the Student Volunteer Movement for Foreign Missions. By 1911 it was estimated that 5,000 student volunteers from America alone had come out of the program. Moody's vision for the mission movement grew as it spread around the world to Europe and South Africa. 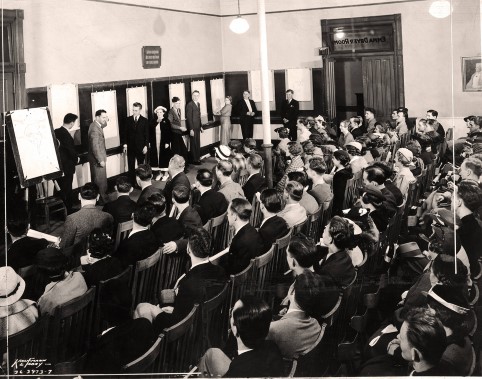 Moody continued to evangelize throughout America, often preaching in major cities and at various universities. His heart was for his schools, and he spent much of his time in Northfield. Moody was a visionary who always seemed a step ahead of the status quo. From training women, to reaching out to lost children, to bridging the gap between denominations, he was unlike any other.

Moody was a man of great discernment. He had an innate ability to find capable, godly people to put into positions of leadership and bring his ideas to fruition. This enabled him to continue his evangelistic outreach while his ministries flourished. Throughout his life, Moody always found time to be with his family, making every effort to show his love and care for them.